Effective in 2018, hemp became legal on a federal level. Until now, many have thought that hemp and marijuana are interchangeable. That’s actually not true; marijuana is quite different and still federally illegal.

Maybe you’ve heard of CBD oil and are aware that it is extracted from these plants. Since hemp is now legal, what does that mean for CBD oil? Is CBD oil legal?

Well, that question can’t be answered unless we explore the various conditions and laws by state. Read on to learn more about CBD legality and how it affects you.

Every five years or so, Congress passes a new bill called a “Farm Bill” that defines the legal practices of food, trade, agriculture, and more. This practice originated during the Great Depression and is still going on today.

Also known as The Agricultural Improvement Act, The Farm Bill that was passed in 2018 made hemp and its products legal. This made hemp a legal agricultural product, which is huge for CBD oil.

Since hemp is legal, is CBD oil legal? Well, there are some conditions to review. Not all sources are created equal.

Hemp is now a farming commodity. Once the new law was signed, it was removed from the list of controlled substances on a federal level. There are still some laws to navigate on the state level.

Cannabis refers to a group of plants, classified as either indica or sativa. Hemp and marijuana both belong to this family of plants. However, with the passing of the Farm Act, hemp is now legal while marijuana is still illegal on a federal level.

Marijuana contains a high concentration of Tetrahydrocannabinol (THC), which is what gives the plant its psychoactive properties. Although some states have made it legal for recreational use, most have only approved it for medical use. On a federal level, the marijuana plant is illegal for both purposes.

Hemp, the plant from which most CBD oils are extracted, is a different plant. It has a very minor amount of THC and is thus used primarily for industrial products such as paper, rope, clothing, oils, and building materials.

The Hemp plant includes all varieties of the Cannabis family that contain little or no THC, which is the substance that makes the plant have psychoactive effects when ingested by smoke or through edibles.

Contrary to what many believe, the hemp variety of Cannabis plants is actually typically cultivated on an industrial level. The seed, hurd, and fibers are all used to create a variety of products.

Marijuana is an entirely different plant (at least legally) from hemp, while still belonging to the Cannabis family of plants. It is the most commonly used illegal drug.

Marijuana has a lot of ways it can be ingested, such as smoking, vaping, oils, dabs, and edibles. Its primary purpose is the get the user high. It has also been said to provide a number of medical benefits, such as treating glaucoma and even cancer. However, these claims are still under debate and require much more research.

What is CBD Oil?

CBD oil is another name for Cannabidiol, which is derived from the Cannabis Sativa plant. When compared to the recreational marijuana plant, it has a negligible amount of THC.

While CBD oil does contain trace amounts of THC, it does not offer a “high” as traditional marijuana does. Also, If you are taking a drug test, the amount of THC is untraceable and will not show up in your results.

Although federal restrictions have prevented extensive research on the subject, users of CBD oil have reported a number of medicinal benefits from its use. These include relief from certain types of bodily pains and mental conditions, such as anxiety and even seizures.

Provided that it is extracted from the legal hemp plant, the short answer is yes. This means that all products made from this type of oil are totally legal, such as supplements, creams, balms, and edibles.

However, CBD oil may be illegal if it is derived from the marijuana plant, unless it has been legalized for recreational use in your state.

There are currently 11 U.S. states and DC that have legalized the recreational use of marijuana:

If you are outside these jurisdictions, the CBD oil legality may vary depending on the type of CBD oil you are using. Hemp-derived CBD is legal, whereas marijuana-derived CBD oil may not be.

Most other U.S. states have legalized marijuana for medical use. Only three states are left that still have laws against using marijuana for any reason.

Especially if you live in the following states, be sure you are purchasing hemp-derived CBD oil:

So, is CBD oil legal? Yes, provided it is extracted from hemp, which is now legal. But where is the line drawn?

The 2018 Farm Bill was primarily intended to legalize hemp for industrial purposes. Because it does not specify nor exclude the oils extracted, you can legally purchase hemp-derived CBD online or from any source.

If you are looking to purchase marijuana-derived CBD oil, you can only do so if you live in one of the states that allow legal marijuana use, which include Alaska, California, Colorado, Maine, Massachusetts, Michigan, Nevada, Oregon, Vermont, or Washington.

Because marijuana is still federally illegal, you can only purchase the CBD oils in-state. Marijuana-derived CBD oils cannot be legally transported across state lines. These oils are still recognized as illegal wherever recreational marijuana is illegal.

CBD oil won’t get you high and doesn’t always come from the marijuana plant. However, claims have shown that there may be a lot of benefits for its use.

Now that hemp is federally legal, it makes hemp-derived CBD oil legal as well. You can now purchase, ship, and possess it without worrying about getting into any legal trouble.

For a variety of hemp-derived CBD oil products, check out our shop page. 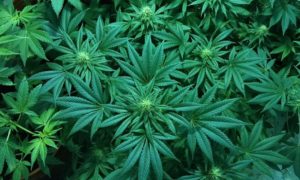